I have always been a fan of art in general. Ever since I was a kid I always liked drawing things which interest me. When I was in Kindergarten 2 I started having an interest in free hand drawing.

I wanted to draw Puti, a typical family dog in a Pinoy family, (most probably next to Bantay in popularity..at least during that time 🙂 ) a character in our class’ textbook. At that time I still didn’t have that much hand control to draw a recognizable image of a dog..it always turned out like gingers..LOL 😀

Then Papa taught me this technique of tracing an image in a book. That time we didn’t have that much onion skin papers around so he taught me of an alternative. He poured a small amount of kerosene in a sheet of bond paper and then gently spread it till it dried. That made the bond paper more like an onion skin paper. He then put it on top of a page of my book where Puti is printed. That moment was magic to me 😀 I can see Puti through the kerosene-smelling bond paper my father prepared for me..and that was a WOW moment for me O_O..at least during my time (kids nowadays are stuck with PSPs and DS)..hehe 🙂 From that day on I started tracing all characters on any textbooks I could get a hold on..from houses to trees, to cats and dogs..and of course, it was the early 90’s, who could have missed the X-Men Blue Team 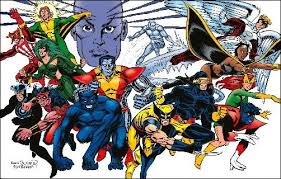 ..oooh I can still remember my Wolverines with two biceps for each arm..LOL 😀

sigh…I really wish I saved those precious childhood scribbles of mine.. regrets T_T

2 Responses to Memories of Childhood Scribbles

A carbon-free dissemination of ideas across the globe.

Notes from the world of software

a random walk through Computer Science research, by Adrian Colyer

Keep moving forward because life will find a way.

a human being unfolding

This WordPress.com site is the bee's knees

when everything seems to die down

in my mind's eye
My "Thought Experiments"